The Scariest of Politicians 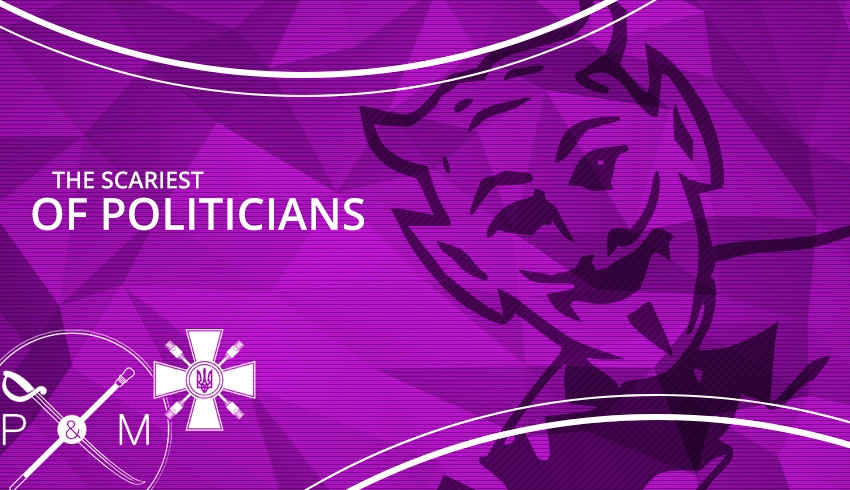 I would like to share with you my very personal criteria — when politician fits it, he immediately deemed unworthy in my eyes. Not a person any more, but something else.

The criteria is very simple: the national agenda should overweight the personal agenda. And regional agenda. Simply put, the politic is defined by his priorities.

For example, one of the politicians who have built his reputation since I was a little kid, fell off his pedestal in my eyes and was trampled in the mud (or worse substance) just as soon as he supported the “Party of Regions” in one of the crucial votes, in exchange for larger budget cut for the county he was elected from. Which didn’t help by the way. The county was deeply patriotic and did not appreciated this impulse, and as a consequences our hero did not get to the next convocation of Parliament. But what’s done is done.

The third ones, and Legion is their name, they block the Parliament rostrum on the day of a vote for crucial bills, demanding to fulfill the wishes of their party sponsors. Any crucial vote, be it a budget, or a key element of the national security, they only consider from the standpoint of “what will we get in return?”

And it’s not even a problem, the problem is, they wouldn’t even come to a vote which will give them nothing in return. No matter how important it is for the country. They simply cannot abandon the basic principle. If you will vote “for free” once, you won’t get any preferences next time! You cannot lower the bets! It’s not profitable.

And this is the core problem of Ukrainian parliamentary system. The fact that any decision should be paid for, in one way or another, to any financial or industry group which “invested” into a parliament party. The fact that there’s only two ways to secure the votes for a required bill: either a carrot in a form of preferences to one oligarch or another, or the stick in the form of administrative (sometimes even criminal) pressure, or a few thousands of quite angry people on the plaza in from of Parliament building. The very logic of politics fails — the only real principle is “quid pro quo”.

We are all responsible for this, let’s face it. The government did not get courage to conduct the electoral reform. Political actors happily play by the old rules. But electors have a right and even a duty to observe carefully, who plays by the rules in the dirtiest way of all.

I cannot repeat this times enough: Viktor Yanukovych was not a pro-Russian politician. To some degree he was pro-Ukrainian: as Yulia Mostova observed logically, he felt protective to a national sovereignty just as much as the character from the “The Magnificent Seven”, who claimed that Texas banks must only be robbed by Texans. Even when he was a governor, Viktor Yanukovych opposed the infiltration of Russian business in Donetsk region, and later, in a status of president, once surrendering the Sevastopol to Russian navy in a gesture of reconciliation, he didn’t fell for future Russian suggestions for a long time. 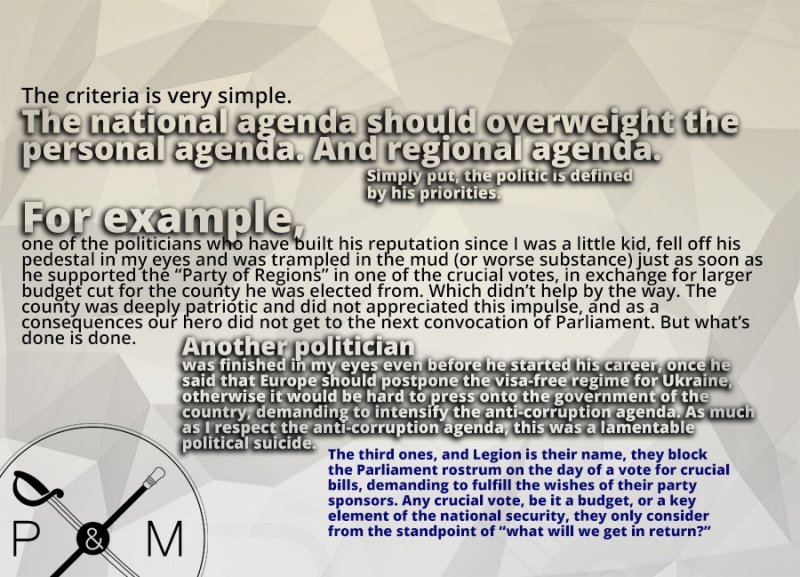 But — only as long until his own greed and shortsightedness put him in a position, when he had nowhere to go except to Russians for funding of his re-election and for the chance of robbing his Texas for another four years. So it happened. And as any normal opportunist, Viktor Yanukovych chose the path of betrayal. Not from the love to Russia, no, but because of his trademark regional directness and his infinite greed he was not able to maneuver as long and as skillful, as Alexander Lukashenko does.

It would be a mistake to think that Ukraine has a sincere pro-Russian politicians, except for perhaps Viktor Medvedchuk and a handful of marginal characters. There are no. And there is no “someone’s people”. The absolute majority of politicians in Ukraine are pro-themselves. We don’t have a loyal vassals — it’s a thing of mentality, perhaps a climate, or maybe something in the air, or this is against our traditions, who knows.

But these pro-themselves people can play on the side of the enemy, if he will persuade them that this would be profitable. They are no less dangerous that enemy loyalists, just because they are easy to negotiate with. It’s easy to put them into a position where they will be eager to accept any proposal.

Let’s suppose, there are opportunist politicians in power in Ukraine, populist politicians. Names, brands, officially declared programs are of no importance here — the important thing is the readiness to trade the national interests for interests personal, to trade foreign policy for internal quarrels. And, all of the sudden, here comes the world financial crisis, which looms on the horizon right now. And this politician, he was a made the same proposal Viktor Yanukovych was made once: our dear friend, we will you give you cash which will allow to support the social programs in your country for some time, until you come up with something. You just need to…

Oh, no, of course not to capitulate openly, no.

Just don’t come to one next summit. Tell them you’re busy. Tell them, you’re unwell. Or schedule the very important visit to Kazakhstan.

Just silently kill the diversification of energy sources. Just with technical stuff, just with few barely comprehensible regulations of the Cabinet of Ministers which will make it impossible.

Just agree to the new peace plan for Donbass. And then lament how the other side doesn’t fulfill its obligations, what a shame!

At the moment, Ukraine is in such conditions that you kill it silently and secretly in hundreds of different ways, and you can do in dozens of ways, loud and proud, under the patriotic manifests.

So beware of opportunists. Beware of them no less, or even more than of open traitors. They will steal from losses, they will kill a cow for one horn, they will murder you with your own hands — and not for the high ideals, but for a very worldly things. They will carefully held the economy in a half-feudal state, because feudalists are generous, and they will carefully held the minds of their citizens in the permanent state of the post-Soviet perplexity, because these are easier to be manipulated with in the pre-election period.

Watch over the votes in Parliament, what for the blocking of the rostrum. Make a note for any time when they try to drown the country because of their interests. Compare bad ones to the unbearable ones. It’s unpleasant, it’s gross, and it’s quite tiresome. And I know you have better things to do in your free time.

But you simply don’t have many options.