The Annexation of Crimea in the Mirror of Russian Propaganda

Disconnecting Kerch Bridge. About the consequences of construction and annexation in general.
#
Putin
Crimean bridge
Russian aggression
Sea of Azov 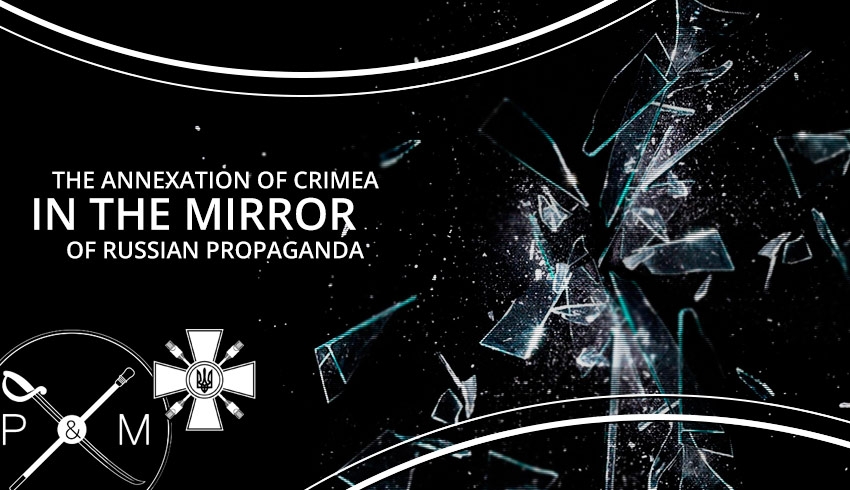 The Kerch Strait Bridge as an Tool of Aggression

The building of the bridge across the Kerch Strait was a sacred act for Vladimir Putin. The plans of building the bridge to connect the Russian territory with the annexed peninsula were relieved by Moscow on March 18th 2014, when Putin had his speech of Crimea “joining” with Russia. Technical issues, the refusal of world companies to take part in the building, a crazy cost on the background of failing economics simply was not taken into account, but the bitter pill of world-wide condemnation of Crimea annexation demanded some impressive accomplishments from Kremlin leader, to cement the new status of Crimean territory. And the most effective propagandist trick would have been the bridge between Crimea and the mainland of Russia, which, by the Putin’s opinion, would ultimately solidify Moscow’s claims on the disputed territory. Thus, this project was a principal one for Kremlin, not only in geopolitical, economic and military senses, but first and foremost in the sense of satisfying the dictator ambitions of Kremlin leader.

And when Putin hopped into the cabin of construction truck and drove along the 12-mile long bridge to Crimea six months before the initial date of completion, he was shining from the feeling of self-esteem — because he had shown the world and his people that no matter the isolation and sanctions he is able to finish the large project, thus proving that Crimea’s annexation is irreversible.

The propagandist machine was started all around the world: “Russia Today” and “Sputnik” on all languages, 24/7 tried to justify the unlawful seizure of Crimea, and to pose the bridge as a historical event of “primordial” Russian territories re-united.

To achieve the propagandist success of this project, crucial in both economic and military senses, Kremlin even accepted the shortcomings in building quality, and the risk of bridge being ruined as a result of winter storms. Both Ukrainian and Russian experts point to the large flaws in construction, which government forfeited to finish the building sooner. The usage of the bridge by heavy trucks id questionable from the point of safety, and the reservations about whether the construction will be able to withstand the compound weight of trains, trucks and cars, resulted in the fact that only one unknown company from Crimea was ready to provide insurance for the bridge.

That or this way, for Putin the Crimean bridge was a manifestation of the final, “physical” connection of peninsula to Russia, with Crimea being connected to Russian infrastructure. And even “The Washington Post” was forced to acknowledge that “Vladimir Putin opened the 4 billion dollars bridge, directly connecting Russia with Crimea. This provided him with a propagandist victory, which caused the disapprovement of West, and was another demonstration of personalized system of government power.” Indeed, the bridge does not simply connects two shores: according to the information of “The Jamestown Foundation” research institution, the bridge is a central element of Russian military doctrine in the region. Since the bridge crosses the Kerch Strait, in case of need Russians can use it to block the half of Ukrainian coastline. To protect the bridge, the special units of national guard were created, and a missile system C400 was deployed in the near vicinity in Crimea.

The dynamics of the conflict between Russia and Ukraine switched to Black Sea almost unnoticed to the world public. After the opening of the bridge in May 2018, contrary to the agreement of 2003 of the freedom of navigation in Azov Sea and Kerch Strait, Russia in fact blocked the access to Azov Sea to all ships higher than 33 meters, while boats of Russian border service started to forcefully stop and control the ships which followed to Ukrainian ports, first of all to Berdyansk and Mariupol. In the end, Russia plans to cut off the territories around Berdyansk and Mariupol from the sea routes, and thus to weaken this region in particular and Ukraine in general.

The incident in Kerch Strait and its neighborhood resulted in the open confrontation between Russia and Ukraine. At the evening of November 25th 2018 Border Service of the Federal Security Service of the Russian Federation opened the fire on the ships of Ukrainian Naval Forces in the international waters — a few of Ukrainian sailors were wounded. The ships were arrested and transferred to Kerch port. In parallel with military escalation, a hacker attack was performed against Ukrainian infrastructure, and the access to the Internet web sites of Ukrainian Naval Forces and Ministry of Defense was suddenly blocked.

An armed seizure of three Ukrainian ships by Russia just few days before the planned meeting of USA and Russian Federation leaders during the G20 meeting in Buenos Aires showed that Putin is ready for the escalation of conflict, no matter the consequences.

And the goal of the attack of Russian military is not a simple damage to the Ukrainian sea trade in Azov Sea. Under the construction of Kerch bridge, Moscow virtually took the Azov Sea under its control. And perhaps the next step of Russian Federation would be an annexation of Azov Sea and the rich Ukrainian oil deposits in Black Sea. These sea territories become the third hotspot of Russian-Ukrainian conflict, after Crimea and Donbass.

There are also some speculations that Russian leadership did not forfeit the idea of land connection to Crimea, which makes the control over the strait and over Azov Sea especially important.

What Putin Got from Crimea?

We already spoke about benefits from Crimea annexation for Russian Federation, which are spread by Kremlin propaganda. With such actions Moscow intends to show the economic and political incapacity of Ukrainian government to its citizens.

But on the other hand, inside the country Putin is going through a serious drop in popularity — it is on the all-time lowest since the moment before the annexation of Crimea in 2014. That’s why the temptation is so high to use the conflict in the Kerch Strait to diverse the attention from the domestic issues through the escalation on the foreign scene, and to mobilize the public opinion. Even a small victorious war on the sea will suit well to help the falling popularity of Vladimir Putin.

But the mass propaganda of Putin’s personal role in the annexation of Crimea and the constructing of Kerch bridge, suddenly, had a completely opposite results inside of Russia. 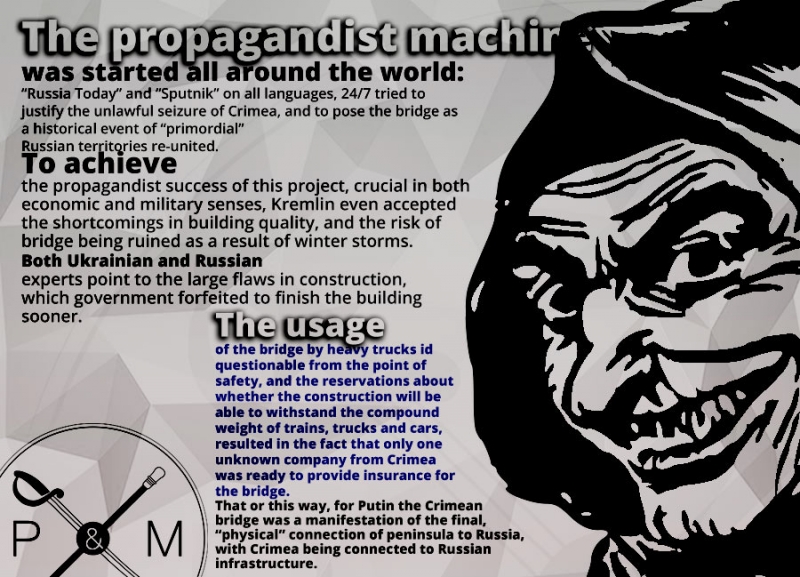 Russian media documented the personal participation of Putin in Crimean and Kerch projects, in details, but this fixation on the Putin’s role also put to attention the ugly side: a countless number of bad quality roads, railroads and bridges all over the country, which, as opposed to Crimea, do not enjoy the personal supervision of president. It is obvious that the government’s intention to pump money into Crimea will result that projects in other regions of Russia will be financed even less. And Alexey Ulyukaev, Minister of Economic Development of the Russian Federation, already estimated the joined amount of Russian investments into Crimea for the next few years as 150-200 billion rubles per year (3.2-4.3 billion Euros). And the main share of these investments will be borne by Russian budget and state companies. All this while the involvement of foreign investors is highly unlikely, because the annexation of Crimea by Russia is not recognized, and international companies are wary of possible sanctions from European Union and USA. All this feeds the protesting potential, Russia is stormed by the large scale waves of protests against the government, including protests against the annexation of Crimea.

And the very opening of the bridge was more of theatrical than of practical nature, because the main transport arteries which lead to the bridge both on the mainland and through the Crimea, are merely start to be constructed.

And though once the aggressive accession of Crimea by Putin had a lot of support in Russia, many of Russians who visited Crimea in first two years after the annexation were disappointed by the service, and in next years chose to spend their budget vacations in Sochi or in Turkey.

Laymen in Russia ask the question more and more often, was the Crimea annexation worth of international isolation, sanctions and the decrease in living standards for a big part of Russians?

The only conclusion is: contemporary Russia is so full of contradictions that managed to build bridges which divide, not unite. A Kerch bridge is a fine example, as it united the Crimean Peninsula with Russia, while diving Russia from the rest of the world even more.

Who’s to Blame, and What to Do?

It happened so that in their strategic doctrine Russians always have seen Ukraine as a buffer zone in front of Western aggressors. There is no doubt that Putin will use the Kerch Strait situation as the next excuse to probe the boundaries, to check how much will West tolerate.

And, sadly, there were no large wave of support for Ukraine in the end. Most of western governments of course condemned the Russian conduct and called for de-escalation. But Kremlin didn’t see any of more firm reaction from its Western partners.

Theoretically, European Union can implement the sanctions against Russia because of provocations in Azov Sea. But such countries as Italy, Austria and Hungary will probably not support such measures. And the direct military support of NATO in Azov Sea is “illusory”, a testament for which us reaction of Donald Trump, who still did not spoke with a direct rebuke of Russian actions.

This convinces Kremlin that no other country would want to enter the conflict because of the freedom of navigation of another country, and there will be little beyond the formal statements of support of Ukrainian position. In this light, we cannot exclude the possibility of conflict between two countries being far from solved, and it can erupt again, on a new level.

More even, the annexation of Crimea and the incident in Azov Sea have shown how little Putin cares of possible reaction of Europe or American government led by president Trump.

This kind of reaction is far from being adequate, USA must move in the direction of containment of aggression from Russia. Including new sanctions and the supply of anti-boat missiles, which would let Ukraine to protect itself better.

Just as in 2014, Western countries will probably be careful, being cautious of direct military confrontation with Russia, but at least they should make it clear that they are not ready to simply witness how Russia in fact conducts the annexation of Azov Sea, and that they will implement the firm sanctions unless Moscow will guarantee the free transit of Ukrainian ships.

But first of all, Ukrainian conflict should be again on top political priority list for USA and EU.

If not, this will untie the hands of Moscow intentions to further use Crimea as a kind of aircraft carrier to spread its power on the large part of Black Sea.