Terrorist Threat in the Steppes of Ukraine. Part II 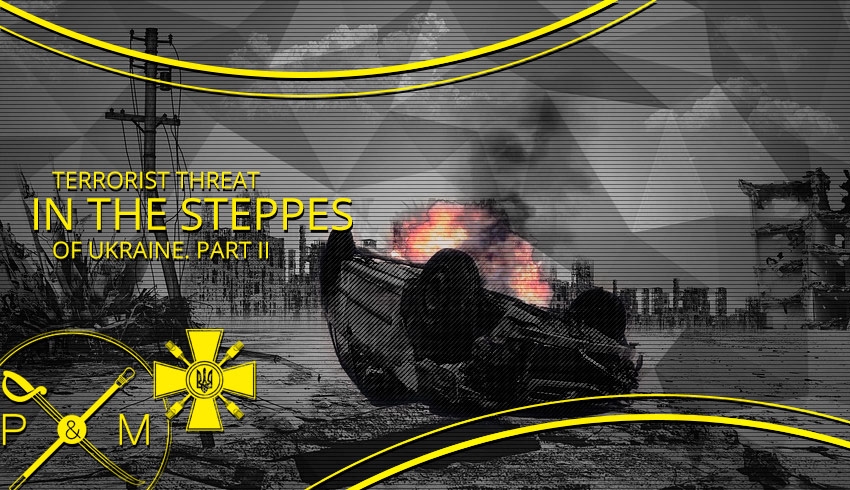 In April 2017, the Russian website Islam-today revealed an information on the functioning of ISIS training camps. In addition, they stated that a group of 15 ISIS fighters, who planned to carry out terrorist attacks in European countries, wanted to make their passage through Ukraine recently. Four months later, the Moscow correspondent John Sparks affirmed the existence of the same training centers for militants to the British TV channel Sky News. He also gave the same figure of people to allegedly be training in these camps -500 jihadists - that later, before the Champions League final,  was published by The Sun tabloid.

It is clear that by disseminating disinformation which should impose the idea of Ukraine’s support of international terrorism, the Russian side primarily focuses on the Western audience. The main message remains behind the scenes and sounds like a refrain: "Repeal your sanctions and allow us to deal with Ukraine by ourselves ... You see, they are the same as ISIS".

On February 26, 2015, Polish journalist and film director Marcin Mamon wrote an article for the American  online news service The Intercept - "In Midst of War. Ukraine Becomes  Gateway for Jihad". Referring to the fictional hero of the article - Khalid, who called himself the leader of the ISIS group of militants, the author wrote about the group by the name of Brothers, whose militants also operated in Ukraine. One of them was allegedly a militant of battalion named after Dzhokhar Dudayev, which fought in Donbas at the side of Ukrainian forces.The article mentioned an easy way of legalization in Ukraine: the new passport which allowed travelling to Europe cost only 15 thousand dollars.

On September 4, 2015, the Russian "opposition" journalist Anna Nemtsova published an article in American edition The Daily Beast about Chechens who had received training from ISIS in Syria and were fighting on the side of Ukrainian Armed Forces at present. Again, without attempting to search for any real evidence, Nemtsova quoted the words of one of the "fighters", whose name was Muslim (the most common name in the Caucasus region). The text also referred to the Dzhokhar Dudayev battalion, and Muslim told how he illegally crossed the border under the fire of Ukrainian border guards.

Probably the same "Muslim" who  just two months earlier gave another journalist, correspondent of Moscow editorial office (who could think?)  of The New York Times Andrew Cramer, a “fairy tale about a gray bull"; who had fought in Chechnya, then in the "Islamic state", and afterwards,  of course, in the Donbas.

An interesting fact: the information about "ISIS and Chechen terrorists" fighting on the Ukrainian side was heard from DPR (Donetsk People’s Republic) and LPR (Luhansk People’s Republic) "talking heads" 2-3 months before such information had appeared in international editions in May 2015. Their speaker Eduard Basurin emphasized that volunteers from the Arab countries were found on the territory of the psychiatric hospital in Yasnobrodivka. He said it was possible that this unit was directly related to ISIS terrorist organization.

Thus the scheme becomes clear. Russian intelligence agencies throw a quagmire, which, of course, bears certain amount of truth,  into the informational field through real people or speakers under their control. This lamentation, with the help of the Russian propaganda machine, is then implanted on the subconscious level of those who consume mostly Russian sources of information, including pseudo-liberal media which have been repeatedly caught in support of the Kremlin's narratives.

According to the rule of Western journalism, "the truth is somewhere in between," these people begin to play "useful idiots of the Kremlin", creating and distributing very attractive and clickable headlines which aim at  bringing more readers to their media sites. After that, basurins and other puppet propagandists are publicly waving printouts from international media: "See, we have also been saying there were Islamic terrorists in Ukraine." The informational circle is closed …

On September 28, 2017 the Syria Today published a Twitter message provided by the Free Syrian Army (SAA). According to the SAA report, during an inspection of one of the houses where formerly ISIS fighters were located, a flag of Ukraine, weapons, a pack of Russian cigarettes and a magazine with crosswords were allegedly found. This information was immediately spread out  by the Russian Internet news agency Lenta.Ru.

Based on the words of the same Basurin, the Russian media also spread the myth about the similarity of the style of war conducted by the Ukrainian Army troops and the ISIS terrorists. All the propaganda sites, social networks and Telegram channels were using the wording like "The Armed Forces of Ukraine use the same tactical techniques as ISIS and Al Qaeda." This did not prevent the Russian side from contradiction in its statements. On the one hand, ammunition and weapons of Ukrainian production seem to be used in Syria. And on the next day, Russian journalists report that allegedly Right Sector guerrillas are using ISIS drones to attack Donbas militants. It is not entirely clear how exactly the ISIS drone should look and how it should be differentiated from other types of drones. However, in order to achieve the scary effect, Russia considered it efficient to mention Right Sector, Ukraine and ISIS in the same text.

In order not to invent anything fundamentally new, Russian intelligence agencies are promoting a traditional myth in Western media that Ukraine is an irresponsible supplier of weapons and military goods. However, in order to connect Ukraine to ISIS, they are adding that the end users of Ukrainian weaponry are Islamic terrorists or countries which unofficially support terrorist activities. 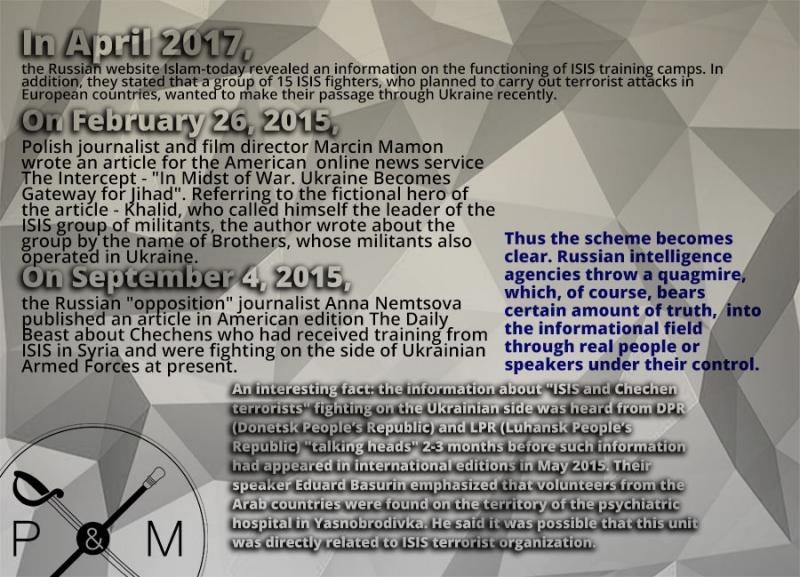 Already in January of 2013, in order to defer suspicion of supporting the use of chemical weapons against the civilian population by Bashar Assad, the Russian intelligence services have forged the electronic correspondence of the management of the British company Britam Defense, which at that time guarded the oil wells in southern Iraq and employed many Ukrainians.

According to widespread information, a representative of Qatar has allegedly offered Britam Defense to use "Ukrainian mercenaries" to deliver chemical weapons from Libya to Syria to arrange provocations there. Copies of stolen internal company documents and passports of Ukrainians were attached to the fake correspondence to give it a genuine look. Four years later, the United States found proof that the official Damascus had been responsible for  a chemical attack, so US attacked Syrian targets with the Tomahawk missiles.

After the attacks, Russian journalists photographed objects similar to Soviet chemical weapons containers at Al Shayrat Air Base. This fact confirmed the presence of chemical munitions in Syria. At that time, a group of investigators from the Conflict Intelligence Team thoroughly described the evidence available, which showed how Bashar Assad's forces could have blown a strike in the city of Khan-Sheikhun in Syria. Volunteers from the InformNapalm group at the same time noted that it was exactly the kind of weapons that, according to the media publications, had been allegedly destroyed in the Russian Federation in 2013-2014.

On June 20, 2015, the South Front, an English-speaking website with Russian roots, issued a material by an anonymous author which stated that between May 22 and 25, 2015, Ukrainian companies supplied 15,000 pieces of small arms (AK-74) to the Saudi TMAS Marketing using a fake Kuwaiti end-user certificate. The article said that these weapons were transferred to ISIS fighters’ training camps.

At the same time, the Russian ambassador to Kuwait, Alexei Salamatin, visited the Foreign Ministry of the host country to convince Kuwaiti authorities of the fact that Ukraine supplied tons of weapons and ammunition to ISIS via Saudi Arabia. However, later, even representatives of Kuwait agreed that as a proof, Salamatin brought only translations from the Russian media source, controlled by Russian special services.

In 2016, the leading Russian media reported that the Ministry of Defense of Qatar organized the supply of Ukrainian air defense systems to the terrorist groups located in Syria via Bulgaria and Turkey, with the consent of the US officials in Qatar.

Fake reports aimed at defamation of Ukraine even tried to link these supplies to the Russian Airbus A321 crash over the Sinai Peninsula, hinting that the MANPADS could have been used to attack a civilian plane.

The main motive for such a large-scale activity was the desire of the Russian side to combine media trends about the commitment of the Qatari capital to separatist militant groups and stories about cooperation between Doha and Kiev.

Undoubtedly, one of the key Kremlin's special information operations in the Middle East region designed to connect Ukraine with ISIS was the publication on November 19, 2016 by the two reputable news agencies Agency France Presse and Associated Press. It stated that Ukraine had been supplying FN-6, the launching anti-aircraft missile systems of the Chinese production, to ISIS fighters. Later AFP removed this material from all its resources. At least, it's impossible to find these publications on Google at their sources right now. But the  information continues to circulate around.

As it turned out, it was spread out with reference to the Kuwaiti Ministry of Internal Affairs, which had detained a group of people of different nationalities suspected of collaboration with ISIS on the day before. Having been questioned, these detainees reported  they received these portable anti-aircraft missile systems (MANPADS FN-6) of Chinese origin from Ukraine through Turkish smuggling route and then handed them over to militants.

Chinese FN-6s became a very popular topic in the region long before these events, as there were some bright videos posted on the Internet where the militants shot down the Russian Mi-8 using those systems.

The Concern "Ukroboronprom" provided an explanation that no supply of man-portable air defense systems or other equipment from Ukraine to the "Islamic state" was simply possible. There were no Chinese FP-6 MANPADS in Ukraine. A corresponding statement was made by the Ministry of Defense of Ukraine. Interestingly, a detained member of the group, a Lebanese citizen, could only say that the weapons could be somewhere from the territory of Ukraine. However, the fact that part of the territory of Ukraine is occupied by the Russian Federation is extremely important for establishing the truth in this case. After all, the sets of such MANPADs could first get into the occupied territory of Ukraine by the so-called Russian humanitarian convoys, which, in violation of all the international norms, have been crossing the Ukrainian border from the Russian Federation.side many times.

Same as other various types of weapons, which were proven to be transferred to the Middle East regions, they could be sent to Kuwait or Syria.