Radioactive Russian propaganda. How does it work in Latvian society? 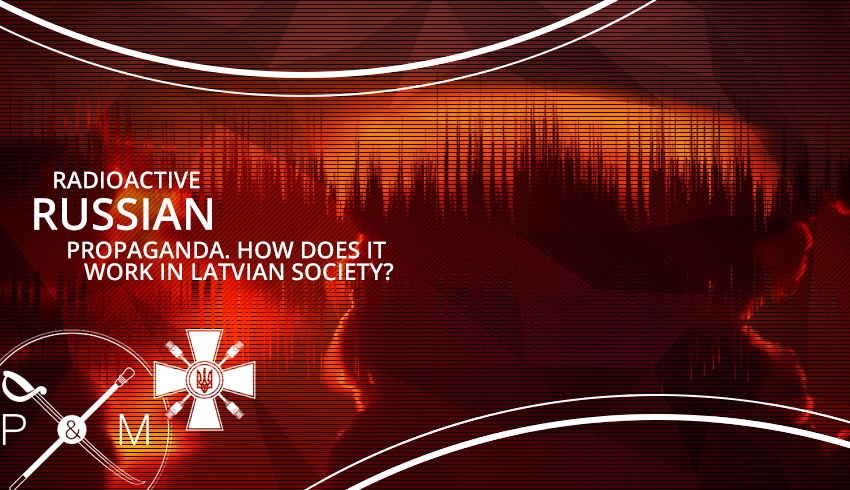 The influence of Russia in the Baltic countries, especially in Latvia, is one of the widely discussed topics both in the Baltic States and in the European Union as a whole. 2018 is no exception. This year can be described as a time when the West was still looking for a way to effectively respond to Russian aggression in Ukraine, interfering in the internal affairs of Western countries and other hostile actions. On the other hand, Latvia and Europe as a whole are going through a peculiar stage of normalization of relations with Russia, within the framework of which solutions for further cooperation are sought. Such a European approach is based on an understanding of Europe’s dependence on Russian natural resources, the need to leave the channels of diplomatic communication open. Nevertheless, there is also an understanding of the need to stop Russia's aggressive actions, and the realization that the strategic partnership between the West and Russia, if it ever existed, was basically just empty rhetoric.

Latvia, which, compared to other European countries, has suffered more from the war of sanctions, does not perceive problems related to the preservation of export volumes and the reorientation of trade as the most significant challenge for the current relations with Russia. The focus is on security issues, despite the fact that there is currently no direct military threat to the Baltic countries. There is also no reason to believe that Russia this year took any reinforced actions in order to massively influence the political situation in Latvia. However, what worries the Latvians is the aggression in Ukraine, military actions on the borders of Latvia, moderate influence in almost all spheres of society, as well as uncertainty about the intentions of Russia or, more precisely, its future actions. It is these concerns that currently determine the perception of national security and the development of appropriate policies.

A special role is played by soft security issues, which are closely related to the information space and its features in Latvia and the Baltic countries as a whole. The Latvian security authorities recognized that the most significant threats from Russia are currently associated with activities in the information space. One of the main sources of vulnerability in Latvia in this area is a divided society and features of information consumption. Historically, there is a situation when in one society there are two communities - ethnic Latvians and Russian-speaking (this means residents of the state who use Russian as the language of communication at home). They account for more than a third more than a third of the total population (37%).

According to public opinion polls, most of the representatives of the community identify with the place, but not with the state, or with the ruling political regime. The government and political elite are generally viewed as hostile. The information space used by the majority of these people in Latvia is offered by Russia. And although the research conducted in Latvia is not enough to demonstrate scientifically the link between the narrative effect of translated propaganda and changes in the audience’s value system, a number of important indicators show that it exists. At the moment, it can be concluded that the Russian propaganda apparatus, realizing the existing weakness in Latvian society, is working to maintain the gap between the communities, preserving the system of Soviet values, sowing distrust of the political elite of Latvia, strengthening the emotional, irrational sympathies to the actions of the Russian president, especially in the international context.

The two main communicators through which narratives inserted in a specific Kremlin interpretation of the world are transmitted are television and the Internet. The third, less influential source is politically and socially active people who are either involved in Latvian politics or are included in the “network of professional compatriots”. The reports of all three communicator groups mentioned above are in line with the objectives of the Kremlin’s foreign policy. Accents are placed in accordance with current events. The themes of 2018 that were touched on were still the presence of NATO forces in Latvia, BREXIT, the place and role of Latvia in the EU, education reform in Latvia, Russian-speaking rights, the theme of nationalism (submitted to the history of the revival of fascism), on May 9 and historical memory and .d.

According to public opinion polls, 93% of the population of Latvia watch TV, of which for almost half of the TV plays an informative role, and another half entertaining. Over 60% of viewers watch TV programs created in Russia (82% of non-Latvians and 52% of Latvians). One third of the country's population watches Russian news broadcasts (52% of non-Latvians). In addition, almost half of Russian-speaking people in general do not receive any information from the media in the Latvian language. There are no significant restrictions on the broadcasting of Russian TV channels in Latvia. Although international and local legislation establishes the tools to ban hate speech, incitement to war calls for war and other messages are those that call for human rights violations. But in reality, the legal and technical possibilities for limiting such messages are very complex and often ineffective. This is evidenced by the attempt of Latvia to ban the broadcasting of RTR for a certain period of time in 2016, as well as other similar events.

As a result, a situation arises when, despite the clearly hostile Kremlin discourse, Russian channels enjoy considerable popularity among the population of Latvia. And if the main part of Latvian speakers looks at other news sources and is critical of the Kremlin’s messages, then the situation with the Russian-speaking audience is more sad. In fact, this part of society belongs to the information space created by Russia. A similar picture can be seen by looking at habits of using the Internet by a Russian-speaking audience. The situation is further complicated by the rather low level of media literacy among the population of Latvia.

What do we get as a result? First, as already mentioned, this alienation of the Russian-speaking population of Latvia from the country, including the opinion of the existing regime as hostile. For example, according to a Pew Research study, about a quarter of ethnic Russians in Latvia do not consider themselves belonging to this country, and only 15% are proud of their country. In addition, according to a study by the Center for Security and Strategic Studies (DSPC), about a third of respondents in Latvia believe that the interests of Russian speakers in Latvia are violated to such an extent that Russia's intervention will be necessary and justified. In addition, more than half of Russian speakers in Latvia demonstrate a rather high support for the activities of President Vladimir Putin of the Russian Federation, especially for foreign policy.

As a result, it is not surprising that more than 70% of Russian speakers do not see in the actions and words of the Kremlin threats to the security of Latvia. As an alarming signal, one should also consider the attitude of a part of the Russian-speaking population of Latvia to events in Ukraine. According to a DSPC survey, only a quarter of Russian-speaking respondents in Latvia see events in the East of Ukraine as a conflict between Ukraine and Russia, and 66% consider this a civil war. No less disturbing is the attitude of a significant part of the Russian-speaking population of Latvia to the NATO presence in Latvia. Since 2013, the negative attitude towards NATO has only intensified. Currently, about half of the Russian speakers believe that joining NATO was the wrong decision. The situation is only slightly better regarding the EU k relationship. Comparatively among the Latvian speaking population, there is strong support for state participation in both of the above organizations. 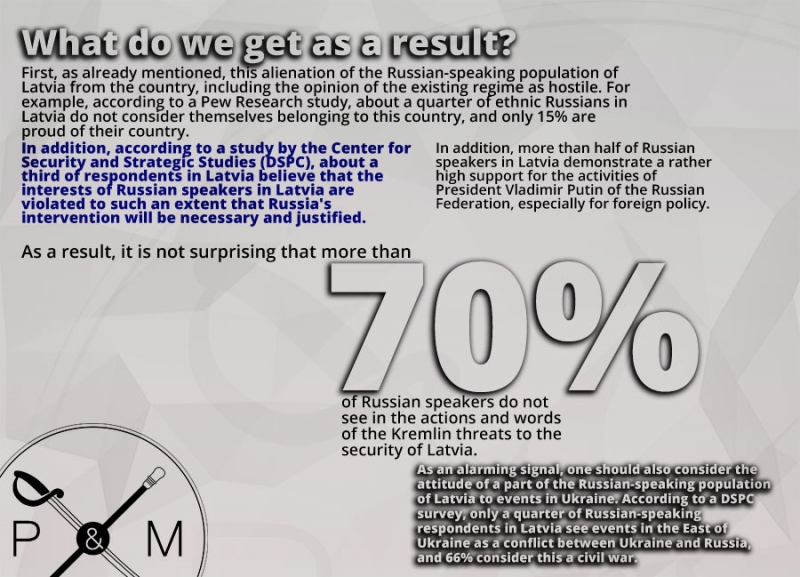 As can be seen from the above, a significant part of the political views of the majority of Russian-speaking Latvia are characterized by a strong correlation with propaganda messages expressed in the Russian media. The vision of the world and the perception of security are significantly different from the perception of security and the vision of the world of the titular nation. As a result, it is not surprising that the historical gap between communities continues to exist. In addition, given the current political situation in the country, the gap between the representatives of the Russian-speaking community and the state authorities, as well as the Latvian-speaking community, may deepen.

The situation is not improved, and a number of systemic problems that are not yet resolved in Latvia. First of all, we are talking about the regulation of the media from the state. Although the media policy guidelines have been developed in recent years, necessary changes have been made in the Criminal Law, as well as in other legislative and policy initiatives, but in practice their implementation remains a serious challenge. An even more serious problem is the introduction of self-regulatory mechanisms for the media environment and the development of high-quality, competitive local entertainment content in the Latvian and Russian languages ​​(analytical and research journalism have achieved significant success over the past two years and are characterized by high quality of work).

At the same time, it should be recognized that, despite these problems, Latvia has made significant progress in strengthening the security of the information space. For the first time this year, a man who deliberately created fake news content on the Internet called for criminal liability. Also, one of the proclaimed "professional compatriots" appeared before the criminal court for inciting hatred and for acting against national security. Ministries and other government agencies have begun serious work on the implementation of appropriate strategic communications. There are positive results. In addition, the active work of security agencies such as the Constitutional Defense Bureau and the Security Police has a positive influence. The contribution of research journalism and various civic initiatives is equally appreciated. An important role in the implementation of anti-propaganda measures and improving the quality of strategic communications is played by the NATO Strategic Communications Excellence Center (Stratcom) in Riga.

In 2018, in Latvia, the implementation of an education reform was launched, which, among other things, envisages the introduction of media literacy, critical thinking skills, and educational activities on patriotism. This is an extremely important step in promoting long-term sustainability and integration. However, this is not considered sufficient. Latvian society has yet to overcome a number of challenges in order to completely fence from the negative influence of Russian propaganda.

The article is part of the work on the scientific project “Subjective perception of the security of the population of Latvia: the impact on the formation of security policy”