The more power law enforcers have, the more the controversies between different structures escalate. 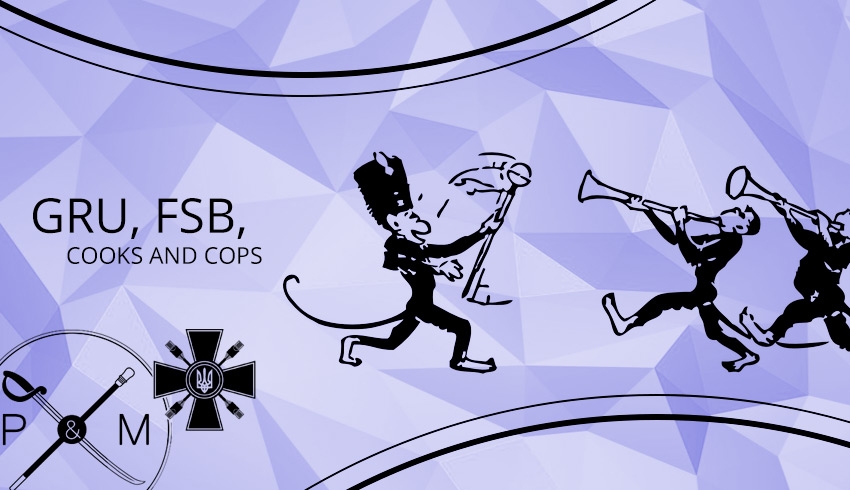 According to both leaked insights and the intended leaks of data, the puppet elections on Donbass are a result of the consensus achieved between the two rivaling parties in Kremlin. One of this parties may be represented by Vladislav Surkov and Main Intelligence Directorate of Russian Federation, the other being Alexander Bortnikov and his Federal Security Service. Perhaps this is why Denis Pushilin was oppointed to be an obedient “president”, while Ananchenko became his overseer. The former head of Ukrainian intelligence Mykola Malomuzh talked in his interview about the fights of Russian special forces for the “Ukrainian prize”.

Either way, we are witnesses to the backstabbing games of Kremlin’s master faithful servants. Who not only doesn’t stop these fights, but sometimes even encourage them, in his own set of strategies for staff resources.

Law enforcers play a special roles in the totalitarian country, where everything is built on the foundation of fear. And the modern Russia is no exclusion. But the more power law enforcers have, the more the controversies between different structures escalate, and even between the different groups in one structure. We get more and more examples of this with every passing day. Let’s consider few of these.

The conflict between Yevgeny Prigozhin (often referred as “Putin’s cook”) and Sergey Shoygu (Minister of Defence of the Russian Federation) which started long ago, finally came into public space. This was especially obvious when Prigozhin showed on the meeting with Lybian generals, and he sat mere 3 sits aside from Minister Shoygu.

The inevitability of this conflict happening was evident right after the creation of PMC Wagner. Private military companies were able to solve few Putin regimes problems at once. Frist of all, they allowed for not using the regular army in Kremlin’s war ventures. That’s how Russia could formally deny the presence of its military in Ukraine or in Central African Republic.

Second, PMC are financed nor from the state’s budget. This lets much better financing of the mercenaries than Russian Ministry of Defense could allow for. There’s a whole waiting list for joining the PMC. On the other side, this is a perfect opportunity for corruption and embezzlement. The war writes off anything! Third, PMC is still cheaper than the regular army which is burdened by a huge number of brass.

Finally, the best of it all, PMC (especially working hand in hand with Prigozhin’s security forces) can conduct quite delicate operations, including the elimination of unwanted. So the services of infamous Petrov and Bashirov may not be needed anymore. Especially because PWC Wagner now intends to get the modern weaponry, while the media tells stories about PWC Wagner’s experiments with poisonous weapons in Syria and not only there. Apparently it is not a coincidence at all that the training camp of PWC Wagner is located on the territory where the Main Intelligence Directorate task forces base is located. 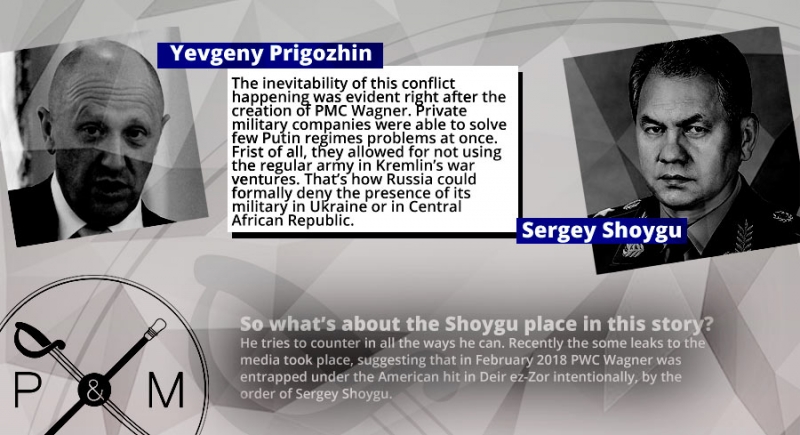 So what’s about the Shoygu place in this story?

He tries to counter in all the ways he can. Recently the some leaks to the media took place, suggesting that in February 2018 PWC Wagner was entrapped under the American hit in Deir ez-Zor intentionally, by the order of Sergey Shoygu. And it is no accident that Russian media (including the opposition “Novay Gazeta”) hosted some sharp critical articles about Prigozhin. This is the last attempt of Shoygu to weaken his opponent. And though one would be worried by such media attack in a free country, there’s little to worry about in a modern day Russia.

One would suffice with simple answer of Putin when he was asked directly about Prigozhin” “Well, you have your Soros, who spreads the democracy everywhere, and who is not an American state as you keep saying to me. And we have Prygozhin.” And this trademark Putin’s grin. He likes it so much that he has such a skilled cook! While the citizens of both Russia and those other states where PWC Wagner surfaces should be really worried, as these are people who are not restricted even by the modern Russian rules. A kind of non-conventional weapon bound by no conventions at all! This weapon doesn’t fit under the conventions of arms limitation, just because it was invented just recently, but it kills people just as well as the conventional weapon does…

We cannot know if young Putin was envious of the much more professionally esteemed Main Intelligence Directorate. But we can say for sure that starting with Putin coming to power, the pressure on the Main Intelligence Directorate starts. It was stripped of its high-trained special task forces, the network of covert agents all around the world was uncovered and leaked out. And perhaps it was no accident at all that Chepiga and Mishkin (aka Petrov and Bashirov) were put out in the spotlight to be laughed at? Were they a members of Federal Security Service, perhaps they faith could be a different one? By the way, the well-known Vladislav Surkov also were serving in Main Intelligence Directorate for some time, as his father were.

Still, the Federal Security Service sometimes gets into the grindstones of special forces quarrels. As of now, that didn’t involve the people on the top of the ladder, but the night is young. Let’s remember the case of “Shaltai Boltai” (“Humpty Dumpty”) group, where suddenly it became known that behind the anonymous hackers collecting and publishing the information on high profile bureaucrats, there’s a FSB curator behind them. Perhaps it is forgotten by a general public, but the loudest investigations of Alexei Navalny (regarding the Shuvalov’s korgi dogs, or Medvedev’s sneakers shoes) started with a facts, disclosed by the “Shaltai Boltai” group.

In August 2018 two employees of Federal Security Service were arrested, which were involved into the investigation of former Federal Penitentiary Service head Alexey Reimer. The goal is fulfilled, Reimer resigned, so now we can deal with the ones involved in the operation… And the convictions for the FSB members in the regions is a usual story now. Just recently, in the September 2018, Krasnodar court arrested the FSB mayor for extortion from one of “Gazprom” subsidiaries. Mayor was caught red-handed, while receiving 1.5 million rubles. Funny thing, the 1.5 million rubles seem to be a favorite number either for the extortionists, or perhaps for the ones who stage their arrests. This spring in Samara oblast the chief deputy of FSB economic security department and his assistant were arrested, receiving the exactly same sum as a bribe. They are charged with connections with the local criminals. So having an FSB ID doesn’t give you a status of untouchable after all. It all depends on which side they play on, and who’s winning at the moment. And of course the fight in regions is much more fierce than in Moscow.

Arresting of Drymanov is connected to the case of criminal lord Young Shakro (“Shakro Molodoy”), who was testified against by Denis Nikandrov. But arrests of such high-level law enforcers are impossible without the sanction from the very high. And of course this is a play for weakening of Alexandr Bastrykin positions. Actually, this story is in full swing at this moment. In September the arrest of Drymanov was extended, in September one of the witnesses of the case Badri Shengelia was killed. And in October Denis Drymanov (whos charges were softened) made some statements. Studying this case we can see the main arsenal of modern day law enforces wars in Russia — arrests and publicity, publicity and arrests.

In the imaginary contemporary pyramid of law enforcers, the Russian Ministry of Internal Affairs is perhaps located at the very bottom level. First of all this is connected to the personal weight of minister Kolokoltsev, the rumors of his resignation are constant. The arrests of his subordinates don’t help as well. Just few days ago, again by the FSB, Oleg Grehov was arrested, a head of Ministry of Internal Affairs department in Sverdlovsk oblast. He is charged with taking bribes in a particularly high amount. But the inside sources tell that his arresting might be connected to the fact of wiretapping of the former Yekaterinburg mayor Yevgeny Roizman. We must note that this arrest is miraculously coincided with the circulating rumors of possible resignation of the governor.

Bribes are not the only crimes the members of Ministry of Internal Affairs structures are charged with. A wave of arrests went through Bashkortostan recently. The scandal started because of raping of the investigator by the three high-profile figures of republic’s Ministry of Internal Affairs. Because of cleanup started, a number of employees were arrested from extortion and abuse of power. Some experts consider this to be an imitation of the fight against corruption staged by the local officials to stay in power. Another question is, would we even know about this rape at all, if the victim wouldn’t be a daughter of the high-level officer of National Guard of Russia?

Of course, the fight between the law enforcers started not yesterday. They were back in times of USSR. Let’s remember Nikolai Shchelokov case. Leonid Brezhnev son-in-law was removed from his position of Minister of Internal Affairs, then striped of all commendations titles. The next day Nikolai Shchelokov shot himself dead with a hunting rifle. At leasts, that’s the official reason to his death. Many consider this to be one of the most prominent episodes in the fight between Ministry of Internal Affairs and the KGB.

We can witness the new chapter in this never-ending fight right now. And the degree of confrontation we can see says that the transition of the power in Russia already started, even though everyone will deny this fact.