About the exacerbation of relations between the regions and the federal center. Causes, consequences and the "invisible hand of the State Department".
#
Russia
empire
protests
scandal 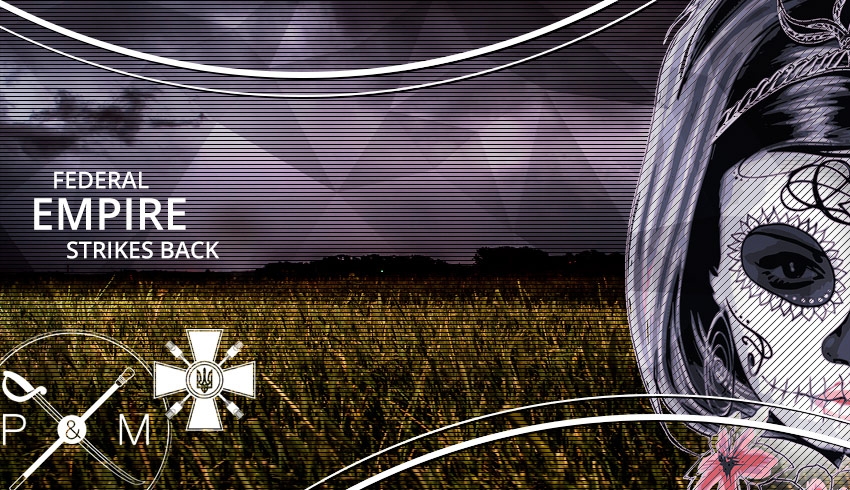 The more crimes the nuts Kremlin brass commits, the more acute is question of when will all this end? And how will this end? Many political experts share the opinion that the process of transit of power already started in Russia. And the important part of this process are the increased tensions between regions and federal center. This is understandable. Regions have less and less of power and money, while they have more and more problems. And important thing is that under current conditions the irritation of elites with Moscow starts to synchronize with the growing of protest movements. That shows in a number of ways.

There were few notable waves of protests in Russia in 2018. And for different causes. Some causes were of local importance, while some were of federal level. Few local level causes are worth of detailed examination: waste protests, territorial conflict between Chechnya and Ingushetia, and the attempt of transfer of Saint Isaac's Cathedral in St. Petersburg to Russian Orthodox Church.

Let’s start with the last one. The main driver of the transfer of the Cathedral was Georgy Poltavchenko, as of now — Former Governor of Saint Petersburg. Many experts connect his resignation precisely with the protest activities, which were a result of citizens of the city fighting got the Saint Isaac's Cathedral. And we should not be misled by the fact that the resignation happened well after the protest actions, because Putin makes all that he can so that noone would even suspect him of acting under pressure. Perhaps this is why Kremlin responded so harsh, if not cruel, to Petersburg wave of protests, with a mass arrests and beatings. It allowed suppressing protests for some time. But in 2019 St. Petersburg will elect the governor once again, so all political processes will intensify.

The Acting Governor of Saint Petersburg Alexander Beglov already has some troubles. Last week, right during the visit of Vladimir Putin to St. Petersburg, raid searches had place in the Fund of Aleksandr Sokurov. After hearing of this, president, who is quite friendly with the film director Sokurov, was furious. More even was he outraged by the fact that acting governor Beglov wasn’t aware of what’s going on. And even though the situation was resolved soon, and prosecutor’s office suddenly had no further questions, Beglov still lost first points in the eyes of Russian president.

Another important story, which got it’s continuation recently, is a territorial dispute between Ingushetia and Chechnya. At September 26th presidents of two republics signed an agreement, under which a part of territories of Сунженского района of Republic of Ingushetia were transferred to Chechnya. A population, which deemed these lands to be their own, came out with protests. The situation worsened because not only a deputies of People's Assembly of the Republic of Ingushetia, but also law enforcers of republic took the side of the people. More even, the local OMON (Russian analog of SWAT teams) prevented the law enforcers from other regions from entering the region, and did not allow them to disperse the protests. So when the Constitutional Court of Ingushetia ruled that the agreement was signed by the president Yunus-bek Yevkurov with the exceeding of his authority, and the question should be put onto the referendum of republic citizens, many observers concluded that this is a forced cession of Moscow in such a tense situation.

Now, the last week, a ruling of Constitutional Court of Russian Federation was published, stating that both presidents of republics acted within their competence and authority, and there is no need in referendum. According to the source close to the court, this is an expected decision, but not the far-sighted one. Indeed, the agreement of 1992 about the borders between republics was not signed, and the territorial disputes between the subjects of Federation are not of competence of Constitutional Court. These are the questions a president of Russian Federation should attend to. But perhaps Vladimir Putin doesn’t want to to cause a quarrel with Ramzan Kadyrov. The consequences of this decision we will be able to see in the nearest future. Deputies of People's Assembly threatened Putin that if government will try to interfere with the procedure of referendum, they will call people for new protest meetings. At December 6th the electoral commission of Ingushetia denied the initiative group in conducting the referendum. Thus, government made its choice. Now it’s a turn of people.

Another important topic which called people onto the streets in different regions is, the Moscow trash. First protests against the Moscow wastes being ditched in Moscow Oblast started in the spring of 2017 in Volokolamsk. They renewed at the spring of 2018 with the new force, and continued until the autumn. That’s why many observers connected them with the elections of local governor. And that looks well-founded, as by the results of the elections which were staged at September 9th 2018, Andrey Vorobyov got the least voices precisely in the districts where the most intense protests happened. 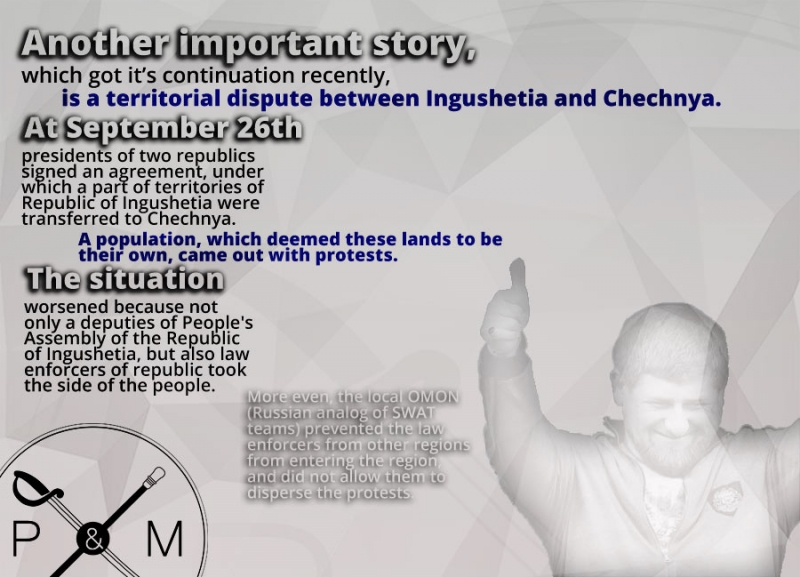 For example, in Volokolamsk his result was only 20%. Compare it to 77% in 2013 — a drop in 57 points! One would think that elections finished, and everything went quiet. But no. More even, trash protest are spreading into new regions. At last weekend the meeting of some thousands happened all over the Arkhangelsk Oblast. 5.5 thousand of people on the action is almost unbelievable number for Arkhangelsk, and the 30 000 people taking part in protests in different regions of oblast is virtually the same as if million went out on the streets in Moscow. So it’s not surprising at all that as soon as Wednesday the governor of Arkhangelsk Oblast Igor Orlov was called in the office of president. Moscow with its rich lifestyle irritates the Russian province for long time, and now, deciding to drown the regions in its waste… No wonder that local powers don’t know how to contain the situation.

It should be noted that there’s a second layer in this trash thing. As almost always in modern Russia, it’s all about the money. The country expects the reform of waste management system, perhaps with creation of new large government structure, and of course with a nice share of budget pie for it. And if one would consider the largest players on this market today, the number one would be “RT-Invest”m which is connected to — what do you know! “Rostec” company, with Rotenberg brothers behind it. The interests of Putin’s oligarch friends are diverse. And of course this is the background which heats up the “trash wars”. Of course it heats up, as the situation with waste management in Russia is pretty catastrophic. That’s why each new wave of “trash protests” is large than the previous one.

Luckily, the Investigative Committee of Russia knows perfectly where to look for enemies. More even, it appears they have “found” the source of all recent troubles of Russian powers, from failure on the elections in Primorsky Krai and Khakassia to the protests in Ingushetia and Arkhangelsk. The cause of the mayhem is … bingo! The Latvian bank “Norvik Banka”.

Well, how will we explain everything if not by the interference from USA. Of course, after the detailed examination it is became clear that Latvian “Norvik Banka” is called “PNB Banka” for some time now. More even, it is a subsidiary of Russian “Vyatka Bank”, owned by Grigory Guselnikov and Nikita Belykh. As we may remember, Nikita Belykh is currently serving the term in the prison in Ryazan Oblast, and works as a librarian behind the bars. Grigory Guselnikov is well known to a Russian TV viewers for being one of the starts of intellectual show “What? Where? When?” — he was the “banker” who served as a keeper of game club treasures. Apparently he had issues with keeping other treasures. In last months the Central Bank of Russia ended the audit of “Norvik Banka”, a new name for “Vyatka Bank”. It is possible that as a result of the audit, the bank will lose its license.

Guselnikov and his bank were often in the middle of the controversy. Once they helped to finance the North Korea in violation of sanctions — though at this moment Guselnikov is in the legal battle with Latvia, trying to prove that the information of North Korea is not truthful. Once Guselnikov together with Said Gutseriev tried to acquire the Ukrainian branch of “Sberbank of Russia”. Apparently the negotiations with Herman Gref, a CEO of Sberbank of Russia, about this acquiring were successful. The rumors say, if the deal was made, Gutseriev was even ready to ask Putin to let Nikita Belykh out of the jail. But something went wrong.

Gutseriev brothers are worth of separate mention, because they are considered to be the people behind the Guselnikov and “Norvik Banka”. And they were active not only in Ukraine, but also in Belarus, working quite closely with Alexander Lukashenko. Their interests were diverse, from the conflict resolutions in the sphere of natural gas supplies, to re-export of fuels and supplies of weapons to Azerbaijan and Armenia.

It seems to be no accident that the supervisory board of the bank includes such political heavyweights as former general secretary of NATO Anders Fogh Rasmussen, or a former chief of German intelligence Gustav Paul Hanning. With a supervisory board like this, bank should expect some ground-breaking “exposures” on propagandist talk shows. Kremlin-controlled Telegram channels already connected the events in Russian Federation regions with a conspiracy of NATO, which is being implemented through the former general secretary of NATO Rasmussen (which can make a phone call to literally any political leader on the planet), and through his presence in the supervisory board of Baltic bank.

Though, as of now Guselnikov spends most of his time in London, and even got the British citizenship. So Investigative Committee of Russia might not be able to call him on a date. This is not an option for the incarcerated Nikita Belykh of course. So it’s all about hard eager are the law enforcers to find the scapegoat. One should not forget that the Gutseriev brothers still have strong connections in Ingushetia. So we might never know what was first, the one-off companies from Tatarstan which laundered the money from “Norvik Banka”, or the Gutseriev brothers themselves, which connections the investigation already tries to untangle. But we will see soon enough how this will be used by Kremlin propaganda. Or we may not see. And this will be an information for further consideration just as well, and would let to reach some conclusions.