Fascists. Part 3. The Junta fairytales. Create your own fascist 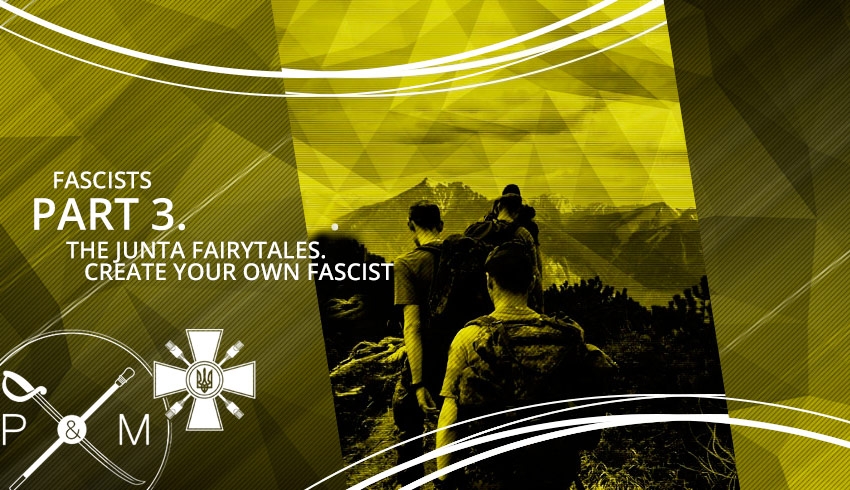 The emotion of fear is the most important and most powerful motivator of human actions. However, a manipulator who wants to attain the desirable behaviour from the audience doesn’t need fear itself. After all, the person who perceives the information one way or another must surely be afraid of someone or something in order to carry out an action required from her by manipulator.

Therefore somebody has to be appointed to the role of an enemy. No matter who. They may be Bandera, Europeans, gays, former associates or neighbors, Martians or cannibals from remote areas of Africa. And in order to make a successful appointment, it is necessary to find or fabricate the evidence of their hostility.

This technology is quite transparent. If you have proper channels for communicating your information to the target audience, as it was for Kremlin in the Crimea and the Donbas, it does not matter if the specific information was real or fabricated.

If you manage to convince a certain segment of the audience, for instant the old ladies who watch TVs daily, they will do the rest of the job for you. In order to secure their own safety, they will gladly tell about the terrible "Ukrainian fascists who have crucified the boy" to everyone around.

However, the fear must be very specific. Russian technologists began to form this feeling in 2011. IIt is difficult to say whether they had the future aggression against Ukraine in mind. However, it is indisputable that a lot of money was spent on this.

Take the story of Iryna Bergset, which became widely known to the Ukrainian audience after a rally in support of the Kremlin’s annexation of Crimes, where she spoke about 58 types of gay in Europe and the zoobrothels.

Her story of formation of fear began in 2011, when almost all leading Russian TV channels showed a story about how she had married a Norwegian citizen, gave birth to a child, then divorced and began to fight supposedly against the usage of her young child by the former husband as an object for the sexual pleasures of his family.

This way, a message was formed that all Europeans were pedophiles. Viktor Medvedchuk’s political movement "Ukrainian Choice" made a massive use of it in 2013. Let us remind that the story of Norwegian pedophiles was told by Iryna Bergset back in the distant 2011, when Europeans did not even think about the possibility of special operations in the informational field and misinformation in media.

All the subsequent stories were no more than a replica of the initial script. The main thing was to put an actor in the frame and let him tell his story which made the blood freeze. First, a little boy was allegedly raped by a Norwegian family. And when this, too, was not enough to turn on emotions, there came a story of the boy who was "crucified as Jesus by the Ukrainian Junta".

Between these stories there was the "friendship train", which, in the end of February 2014, had to go to the Crimea, according to Russian propagandists. They have very successfully used the words of the now deputy of the Oleg Lyashko’s Radical Party - Igor Mosiichuk, pronounced by him on the TV channel "112", while sitting in a black T-shirt with runes on his chest on a talk show. In the heat of the debate, he said that, “in order to calm down the Crimeans who are not satisfied with what is happening in Kyiv, they and their brothers can gather people and send them to the Crimea by train".

Actually, this was done in 1992 with the participation of Dmytro Korchynsky. But the train simply was stopped at the entrance to the peninsula, after which "passengers of friendship" left the train. Korchinsky himself wrote later that they got to Sevastopol by boat. How true is this - nobody knows. And how many "friends" from the train could fit into the boat? Is it important at all? The main thing is to create the scary picture.

The picture has already been created (by the way, it is still not clear why and for what did Mosiichuk say that). It was necessary to provide with this picture the hard-nosed Russian journalists of the central TV channels, which had a massive audience throughout Crimea. And the hell broke loose...

All the Crimeans began waiting for the “train of friendship": both those who were pro-Ukrainian-minded, and those who "wanted to Russian homeland, no matter what". The fear of "the friendship train" immediately became an explanation of actions for those people who depended heavily on the TV: "We all should welcome joining Russia, because if we do not, the "friendship train" will arrive…”

In the Donbass region they only had to repeat the same things in a worse manner . The fakes about the cruelty of the Donbas battalion sometimes went beyond any reasonable limits. For example, on May 28, 2014, Russian media have spread the fake correspondence between Semen Semenchenko and Interior Minister Arsen Avakov, in which the commander of the battalion admitted that he had ordered the shooting of a dozen of his fighters for a retreat from the battlefield. The information was disseminated by the so-called "United Cybermilitia of Novorossiia". "StopFake" was able to easily identify falsification of the correspondence by the signs in the screen of alleged Semenchenko’s account - the lack of online contacts and the button "Find friends", which is displayed in the case of a small number of friends on Facebook, while in real Semenchenko’s account there were 5 thousand. It means that the alleged pages of Semenchenko and Avakov were fake. It was significant that Dmitry Yarosh was mentioned as responsible for the creation of the Donbass battalion, although he had no relation to that

The trick with alleged correspondence of Semenchenko was repeated again. On July 5 of that same year, Russian media reported that the Facebook account of People's Deputy Serhiy Vlasenko, who supposedly traded the organs of severely injured soldiers in the company of commander of the Donbass battalion Semen Semenchenko and the German physician Olga Wieber, was hacked. According to StopFake, this fantastic lies was denied by both Olga Wieber and the German radio station WDR, which turned to the German ministry and the police and received a response that there was no such possibility for such a trade.

The diversity of the themes was often impressive. On September 17, 2014, Pravda.ru and several other publications wrote that the Aidar fighter from Luhansk region was buried in the Ternopil region, because his father and mother abandoned their son-”banderivets”.

During the hot phase of Russian aggression, from July 2014 to February 2015, Russian media began to actively promote the narrative about "genocide of the Russian-speaking population". The fighters of the volunteer battalions became symbols of the process of induction of this narrative. And in the future, this narrative began to be reminded constantly by everyone, including Russian President Vladimir Putin, in the context of the possible introduction of a peacekeeping contingent in the Donbas. The Russian side permanently expressed the demand to prevent the control of Ukrainian authorities over their own territories and the border. They said: “When the Junta comes to Donbas, it will retaliate against the locals."

The Media Detector, in a study of the rhetoric of Russian propaganda in 2014-2016, wrote that in July 2014 - February 2015, the main task of Russian propaganda was to cover and deny the facts of armed aggression against Ukraine and support for separatists, information support of conditions of termination of the conflict in the Donbass which would be favorable for Russia.

In this connection, Russian media simultaneously with senior Russian officials began to describe the situation in Ukraine as "genocide of the Russian-speaking population". Focusing on the Western audience, Russian propagandists falsified the statements by international organizations and attributed the words "genocide" to them.

One such case was the media coverage of OSCE observers working at the site of the mass grave in the village of Lower Krynka, Donetsk region in September 2014. Immediately a few Russian TV channels reported mass rape of girls aged 12-14, reported by a human rights activist from Latvia who described the events as "genocide”.

"StopFake" analyzed the actual reports of the OSCE and Amnesty International on the situation in Lower Krynka, which concerned three graves with nine bodies, five of which were representatives of the so-called "DPR", who died in battle. The Latvian expert was found to be the "paid actor" of the Russian TV channels Einars Graudins who appeared on Russian fake news on several occasions and about whom the Ukrainian fact-checkers wrote repeatedly.

The Russians were shamelessly investing in European organizations that held rallies and public campaigns under the walls of European institutions with demands to "stop the genocide in Donbas." The representative of the Union of Writers of the DPR - Snighana Aendo - was one of the initiators of such events, and representatives of local Russian communities and pro-Russian organizations in Europe were local coordinators of the action. And all of it happened despite the fact that in the Kremlin media the action was presented just as "European".

On November 10, 2017, the Senator of the Federation Council of the Russian Federation, Franz Klintsevich, said that the peacekeeping contingent could not be put into the occupied territory of the Donbas on the grounds that it would make genocide possible. Unfortunately, the world community is still believing into this Russian hogwash, without the ability to stop the aggressor. Although Ukraine offers active support for the various formats of the peacekeeping mission. So, does it mean that the mythical "fascists", created by Russian agitprop, have long taken world community hostage?!