On the importance of energy independence 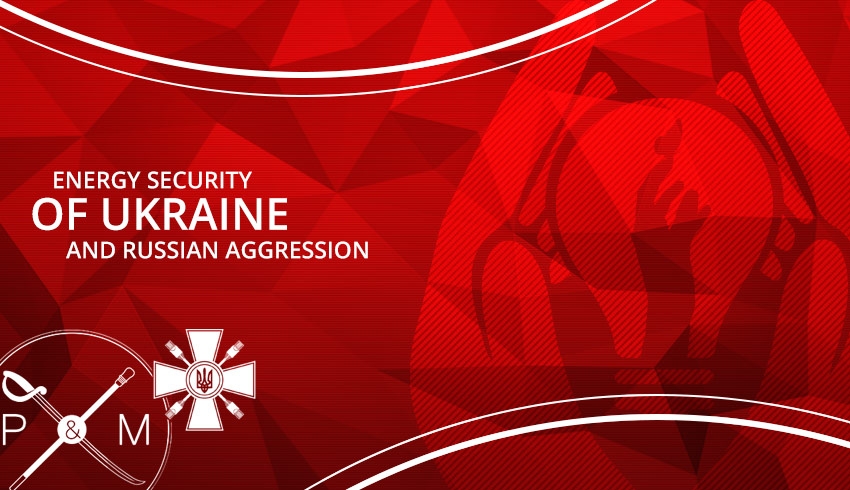 The energy independence of the state is the ability of the state to provide final consumers with energy in the required volumes, of adequate quality and in any conditions.
(dictionary definition)

Today, Ukraine is an energy-deficient country, whose reserves of oil, coal and gas are not enough to meet the needs of its own economy and population. But the problem is not even that, a similar situation is normal for almost all European countries, but the fact that our country receives the bulk of hydrocarbons (about 85%) directly from one source, Russia, or the purchased energy flows to Ukraine through transit through Russian territory . And in accordance with international practice, such independent sources should be three or four. In the attachment of supplies to only one country there is a threat to the political independence of the state as a whole.

Now that oil and gas exports are key to the stability of the Russian budget, hydrocarbons have become an instrument for Russia to gain political influence in those countries that depend on Russian supplies. In this regard, Kremlin propaganda in Europe is noticeable at different levels: these are protests against shale gas, in connection with which there appeared a mass of materials, convincing that it is safest to continue to buy Russian raw materials, as well as spreading the thesis as if any alternatives (LNG from the USA, shipments from Norway are not economically viable.The authors of the propaganda messages use the fact that energy security is a complex, incomprehensible for most of the topic, in which it is easy to slip into pure emotions and popular myths in the press that have nothing to do with reality. Let's try to figure it out.

Ukraine does not surrender to the enemy

The Kremlin’s prophecies about the energy catastrophe of Ukraine without Russian gas, as well as Ukraine’s disruption of gas transit to the EU, turned out to be only theses of Putin’s propaganda. The gas sector has demonstrated that we can withstand the gas blockade even in winter conditions. 2014 was the first year in the history of Ukrainian-Russian gas relations, when Ukraine, under a gas blockade by Gazprom for 6 months, dispensed with Russian gas from June 16 to December 11. Since November 25, 2015, Ukraine does not import Russian gas at all.The winter periods 2015/2016, 2016/2017 were completed thanks to own gas production, reverse supplies from the EU and reserves in the UGS. There is every reason to believe that the winter period of 2018/2019 will also pass without any problems.

That is, the main indicators of the dynamics of gas consumption and imports in the current decade indicate the "gas stability" of Ukraine and the steady decline in the influence of the Russian gas factor on its economy and politics.

At the same time, next year, due to the completion of existing gas contracts with Russia, it will be time for the Ukrainian authorities to take an exam to find answers to a whole range of questions in such areas as the gas and oil industries, oil refining, power generation, support for energy efficiency and affordable local renewable energy.

And not only Ukraine will face the threat of a powerful blow to its own energy security, but also for the EU it will be a test of endurance, solidarity and decisiveness of actions in a tight time frame.

In Russia, not so simple

In the coming years, the prospect of the complete loss of one of the largest gas buyers in the face of Ukraine, against the background of the unrealized with the onset of the American shale revolution, the possibilities of increasing gas exports to Europe are unlikely to please Gazprom.

In Ukraine, 54% of electricity is produced at NPPs with reactor installations of the type VVER-1000, and the role of NPPs in the energy mix is ​​difficult to overestimate. After all, a decrease in coal dependence of thermal energy, taking into account the fact that anthracite mines are located in the occupied territory, was achieved precisely due to the maximum possible increase in the share of electricity production at nuclear power plants at this stage and a reduction in the production of coal generation. The flip side of the medal was the reduction of the maneuvering capacities of thermal energy, which is a serious challenge for the stable operation of the Unified Energy System, especially when nuclear generation is the target for cyber attacks, as it was on December 23, 2015. There are only two manufacturers of nuclear fuel for VVER-1000 reactors on the world market - TVEL OJSC (Russian Federation) and Westinghouse.Despite the state targeted program for creating a closed nuclear cycle and the 10th place in the world in the extraction and processing of uranium ore, Ukraine is only planning to produce nuclear fuel.

Even more than Gazprom, the other Russian monopolist, Rosatom, is interested in maintaining the largest nuclear fuel market for itself. And it's not just the $ 600 million that the TVEL concern annually receives from Energoatom NAEC for fuel elements.More importantly, any disruptions in the supply of fuel elements to Ukraine can cause an irreparable blow to the international image of Rosatom, in particular, cast doubt on the agreements signed by Russians on the construction of nuclear power plants in many countries around the world. And the beginning of the use of American cassettes of the Westinghouse company in the framework of diversifying the supply of nuclear fuel to Ukraine is hardly pleasing to Rosatom. On the other hand, with the transit of Russian gas to Europe is also not so easy. Ukraine proved to be a reliable transit country, and if the threat of interruption of gas supplies to the EU during the winter period remains, it is only because of the technical problems of Gazprom itself. We are talking about long-term pressure pulsations on the main gas pipelines through which gas is transported from the Russian Federation to the EU. Analyzing the reasons for this, NJSC Naftogaz of Ukraine suggested that, due to the unsatisfactory condition of a part of the Russian gas transportation infrastructure, Gazprom is simply unable to consistently maintain the pressure in the system at the required level.This version is confirmed by the fact that all the latest publications of the Russian media are focusing on the construction of new gas pipelines, diverting public attention from the emergency state of traditional gas pipelines.

But one cannot exclude the possibility that gas pressure pulsations at the Ukraine-EU border are being made by Gazprom to demonstrate to the West the alleged unreliability of Ukraine’s GTS for gas transit to European consumers. 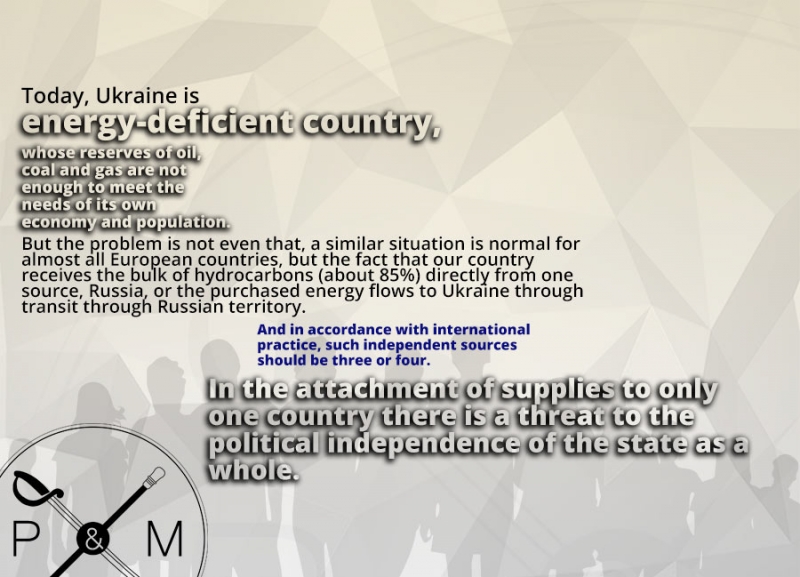 Obviously, the calculation of the Russian side was to emphasize the need to complete the "Nord Stream - 2" under the pretext of the deterioration and accident rate of the Ukrainian GTS. Although the statistics show just the opposite - a decrease in the number of failures on the pipelines of the Ukrainian gas transportation system. I must admit that Ukraine is not in a position to stop the Russian bypass routes independently. Here we have to fully rely on the position of the EU and especially the United States, which, from both a geopolitical and an economic point of view, is important to stop this project. If active diplomatic opposition does not work and the Nord Stream - 2 will begin to build, in Washington’s arsenal, however, the last argument remains - the imposition of sanctions against companies that will participate in it.

Where is the way out?

Given the current challenges, Ukraine should build a system of its own energy security, based on the priority of national interests and relying as much as possible on its own strength.

In the conditions of the aggression of the hybrid type carried out by Russia against Ukraine, the achievement of the minimum level of energy dependence on traditional Russian sources of energy supply acquires priority importance. It is necessary to maximize opportunities for diversification, and over time, where it is possible and economically feasible, and a full transition to providing its own energy resources.

In the hands of Ukraine there is a sufficient set of tools for internal actions, which should minimize the threat to the country if even the Russian bypass gas pipelines are implemented.

Ukraine has a huge energy potential. It occupies the first place in Europe in terms of uranium ore reserves and the third in terms of natural gas reserves. Oil reserves in the country and gas condensate, even in the absence of active exploration, will last for another 20 years. The design capacity of 7 oil refineries located in Ukraine exceeds 50 million tons.

That is, with timely modernization of the plants, the production of fuel for them could be 4 times higher than the country's need for petroleum products, Ukraine could become a major exporter of gasoline and diesel fuel. And according to the Ukrainian Institute of the Future, by 2022 the country can become fully self-sufficient in gas, oil and oil products.

But for the implementation of such optimistic forecasts, Ukraine needs to do a lot.

Thus, it is obvious that plans to reduce the consumption and production of blue fuel in the country, which would give Ukraine a chance of self-sufficiency in the gas sector from the heating season 2020–2021, are unlikely to be realized. And this, in turn, testifies not only to the need for decisive steps to intensify measures to reduce gas consumption in the household sector, but also to increase its production by companies regardless of ownership.

In addition, it is necessary now to set a course for the maximum filling of domestic storage facilities and the creation of a strategic resource, while gas in large volumes is still passing through the Ukrainian GTS. After all, if it were possible by the beginning of the heating season of 2019-2020, the reserves in domestic underground gas storage facilities could reach 30 billion cubic meters of gas, while reducing consumption and production it would be possible to provide the country with blue fuel at least until the end of the heating season of 2021-2022. This time would be enough to find an acceptable alternative to imported gas and so balance the volumes of production and consumption so as to be able to calmly survive the heating season of 2022-2023 and all subsequent ones.

The task of the government is to create conditions for the emergence of investment resources from Ukrainian companies and the attraction of foreign capital and technology to the industry.

In conclusion, I would like to note that the EU’s capacity to provide Ukraine with broader energy security guarantees is limited, so for any escalation of the conflict with the Russian Federation, it will be necessary to rely primarily on its own stability, namely, on the formation of sufficient gas reserves in storage, its own production, operational readiness the gas transmission system to work in a special domestic mode, the creation of strategic reserves of petroleum products, and, most importantly, a coordinated state and national policy and a clear interaction between the government, business and citizens.